An Inside Look at Alex Honnold’s Adventure Van | Outside 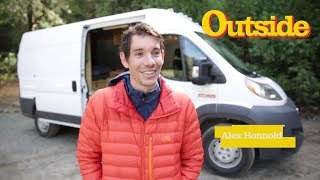 Professional climber and longtime “vanlifer” Alex Honnold gives us a tour through the upgraded 2016 Dodge Ram Promaster that he calls home.

Honnold recently upgraded his living space from a 2002 Ford Econoline E150 to a newer, custom-built 2016 Dodge Ram Promaster – so, of course, we sent photographer Max Whittaker to hang with him in Yosemite and get a peek at his new digs. Built by Honnold’s friend, Mason Earle, and customized with scrap metal from the Black Diamond factory and an etching of El Capitan on the van’s door, the small space houses everything Alex needs for simple yet comfortable day-to-day living. He discusses the pros and cons of life on the road, the joy of simplicity that comes with van living, and his philosophy on daily showering (it might not be as necessary as we think).