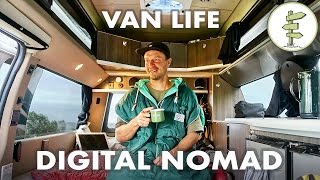 Julien is an entrepreneur and video producer from Montreal, Canada who lives and works in his camper van full-time.

In the last few years, road tripping in campervans has become a popular way to travel on a budget, and many people are taking the trend one step further by living the van life full-time to save money and to enjoy the special freedom and flexibility that a life on wheels can offer.

While living and travelling in a van can be a cheap lifestyle, it’s certainly not free. We caught up with our friend Julien from Go-Van http://www.go-van.com/ while we were on Prince Edward Island (PEI) in August 2016 to find out how he’s turned his awesome camper van into a mobile office so that he can be a digital nomad and earn money on the road.

At 30, he sold his first business, an online skateboarding magazine called 33mag, and invested the money he made in a condo, but he preferred to travel as a digital nomad in his 1989 GMC Vandura camper van looking for adventure and good surfing.

The freedom he experienced on his trips in the van, and the people he met on the road increased his passion for the van life and inspired him to start his second business: the Go-Van website, where he shares road tripping stories from fellow van dwellers, and videos about his travels.

To finance the Go-Van project, Julien needed a business model so he started creating video content for brands and tourism bureaus while he travelled.

When he’s working on the blog, applying for contracts and planning his upcoming video projects, his mobile office is very simple. He uses a cell phone to create a wifi hotspot for his laptop, and he has a bag full of hard drives with his video footage.

To power his laptop and cell phone, he’s got a couple of house batteries that can be powered by the van’s alternator, or by the solar panels on the roof.

When he’s producing a new video, the van turns into a full-on mobile production studio. For each week-long video shoot, he hires 1 or 2 videographers to live and work with him in the van, along with all their camera gear.

There’s usually two people sharing the bed, and a third person sleeping in a tent outside.

One of his first video contracts was for a Quebec-based camper van conversion company, Safari Condo, in 2015 that led to a long-term partnership with them that allows him to use one of their super functional camper vans year-round.

Now that he has all the comforts of home on the road with him, like running water, a shower, and a kitchen, he’s been able to make a big change in his life by renting out his condo and transitioning to living and working in the van full-time, which allows him to enjoy his passion for travel, camping, the outdoors, and adventure.

The one challenge that Julien sometimes finds hard with this lifestyle is being away from friends and family. But aside from that, the more he learns and experiences on the road, the easier this extreme lifestyle becomes.

Check out the Go-Van website http://www.go-van.com/ to keep up with the latest van life stories from around the world and follow them on Instagram https://www.instagram.com/go_van_com/ for some amazing van life inspiration.

A special thank you to Naulé for sharing his song, Motion, with us (first song in the video). It’s so good! See his social media links in the credits below to listen to more of his music.

We want our channel and our comments section to be an inclusive space where everyone feels welcome to watch and to contribute. For this reason, comments that are inappropriate or hateful will be reported and/or deleted.

Please discuss and debate with respect, and report inappropriate or hateful comments directly to YouTube.

All remaining music in this video was composed, performed, and recorded by Mat of Exploring Alternatives.

Filming Credits:
Mat of Exploring Alternatives
*A few video clips, drone shots, and photos were provided by Julien from Go-Van.