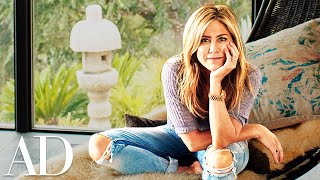 Aniston’s latest residential project is the reimagining of a Bel Air house that was designed by architect A. Quincy Jones and completed in 1965.

The actress acquired the property in 2011, after selling her beloved Hal Levitt–designed home in L.A.’s Trousdale Estates enclave (AD, March 2010) and attempting to relocate to Manhattan—a move ultimately thwarted by the rabid paparazzi that swarmed outside her Greenwich Village apartment building. When she bought the Bel Air property, it had recently emerged from a renovation by architect Frederick Fisher, which, despite its sympathetic embrace of Jones’s vision, skewed a bit too cool and minimal for Aniston’s taste.

Aniston enlisted the aid of AD100 interior designer Stephen Shadley, with whom she had collaborated on her previous L.A. home, to perform a similar alchemy in Bel Air—namely, to preserve the modernist ethos of the original scheme while softening some of its sharp lines and outfitting the interior with tactile, organic finishes and furnishings.