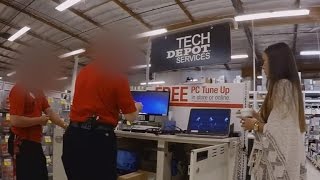 Office Depot is under fire for services that a former employee believes take advantage of unsuspecting customers. An undercover investigation by CBS affiliate KIRO appeared to capture the company’s technicians diagnosing computers with problems that did not exist. KIRO’s Jesse Jones, who broke the story, reports.