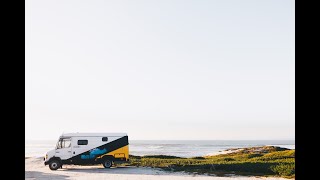 Vanlife is a lifestyle that becomes more popular day by day, mainly in the surf community. Therefore, “Living the Vanlife” is a documentary that looks for the answers to some of the most asked questions about living a life inside a van.
“What is Vanlife?” “How do you sustain yourselves?” “How did it all start?” These are some of the questions to which the director found the answers.
Living the Vanlife – the DOCUMENTARY was premiered at cinema at “Lagoa Surfe Arte” Festival, Brazil, and after that on “SAL – Surf at Lisbon”, one of the most reputable and prestigious surf film festivals in Portugal.

Being a growing lifestyle and also being a controversial theme, the documentary “Living the Vanlife” is a first approach to the matter and intends to clear some ideas. The main objective was to show that it is possible to live inside a van and that the people who do it are as normal as the ones living in a flat or a house.
Having this lifestyle is not a synonym of being, for example, a hippie. Living in a van is frequently a decision made with consciousness and an objective. This is the reality that “Living the Vanlife” exposes, show as well that there are several reasons why people choose this path.

João Diogo Polónio is a Portuguese Director. Born in Lisbon, he has a Degree and a Masters Degree in Audiovisual and Multimedia, both finished in Escola Superior de Comunicação Social. He was the winner of the 2107 edition of “Prémios Tripla”, organized by EDP Foundation and Escola Superior de Comunicação Social with “Living the Vanlife – the DOCUMENTARY”
He is also the founder of The Outside Crowd – an online project focused on surf culture that produces audiovisual, photographic and written content since 2015.

More from The Outside Crowd:
http://www.theoutsidecrowd.com