Why 9-Year-Old Boy With Autism Got Arrested at School 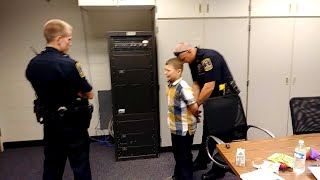 More from Inside Edition: https://www.youtube.com/user/cbstvdinsideedition?sub_confirmation=1
The parents of the 9-year-old who was arrested in August after fighting another student and striking a teacher are speaking out. Cops were called after fourth grader Devin Shepherd got into a fight with a classmate during recess at Needham Elementary School in Franklin, Ind. When a teacher intervened, Devin hit the teacher. The boy’s father recorded the heartbreaking scene. “Just chill out buddy. You’re leaving with me. I promise you,” the father told his son as he was being arrested. #InsideEdition