Motorcycle Camping Across America by Backroad and Byway – Part I: The West 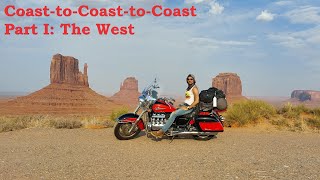 Coast-to-coast-to-coast motorcycle camping trip on my 2000 Honda Valkyrie, Buffalo, in the summer of 2021. I started in San Diego, crossed the Rockies and the Great Plains and ended in New York for a week to attend two weddings.

A week later, I left NYC for Washington DC and then for San Diego traveling down the Natchez Trace Parkway through the South before turning West across Texas. I did very few interstate miles. The trip consisted mainly of backroads and scenic byways across America; small towns and rural places. I tried to camp as often as I could, but every 2-3 days I would take an inn to do laundry and shower up.

Part I: From San Diego, CA to Sioux City, IA